Join Margaret Atwood on Iceland to Greenland: In the Wake of the Vikings with Adventure Canada

Save up to 25% | Ocean Endeavour | 2021 Small-Ship Expedition Tour | Reykjavik, Iceland to Kangerlussuaq, Greenland

Join Margaret Atwood on Iceland to Greenland: In the Wake of the Vikings

Savings: Save 25% when combined with High Arctic Explorer 2021 (Applies to berth cost only)

Solo cabins available based on availability

In the Wake of the Vikings Itinerary:

Video: In the Wake of the Vikings: A Journey from Iceland to Greenland | Adventure Canada

Iceland’s cosmopolitan capital, Reykjavík was established in 874 AD. Powered by geothermal energy, Reykjavík is widely considered one of the cleanest, greenest cities on Earth. Food, culture, and nightlife abound. The National Culture House preserves treasures like the Poetic Edda and the Norse Sagas in their original manuscripts. We depart Reykjavík in the evening aboard the Ocean Endeavour after an organized tour.

Sailing west from Iceland, we are truly in the wake of the Vikings. We’ll be watching for whales and seabirds we sail the Denmark Strait. Our onboard program will prepare you for the archaeology, history, culture, and wildlife that awaits us in Greenland!

Our first view of Greenland’s east coast will reveal a coastline traced with innumerable fjords and potentially dotted with pack ice. Our spotters will be watching for bears, seals, and humpback whales. We’ll explore the remote reaches of glaciated fjords by Zodiac.

Joining the Irminger and Labrador Seas through the islands of the Cape Farewell Archipelago, Ikerasassuaq (Prince Christian Sound) is among the world’s most majestic waterways. Craggy mountain peaks tower over still waters fed by calving glaciers. We’ll make the most of our deck time, scouting for landing opportunities on the skirts of the mountains.

South Greenland lives up to its namesake; here, the land is fertile and agriculture thrives. Farms and vegetable husbandry contrast with the barren ice that covers so much of the country. Jagged mountains rise from beyond green pastures, with sheep farms directly bordering ice fjords. Here, Norse settlement history intersects with contemporary Greenland life. 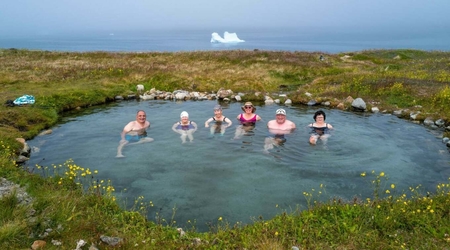 The Norse settlement at Hvalsey was a major centre in South Greenland in the early centuries of the last millenium. Hvalsey Church is the best-preserved Norse ruin in Greenland. The last known record from the original Norse colony is of a wedding held here in September 1408!

A UNESCO World Heritage Site, Brattahlið is in the most fertile part of Greenland and was the home of Viking explorer Erik the Red and his descendants until the 1400s. A reconstructed Norse church and Viking longhouse are featured here. Greenlandic Inuit now run the sheep farms originally worked by Norse settlers.

The Sermersooq region of Greenland has a stunning myriad of mountain peaks, glaciers, and deep fjords. Our time will be spent on the western coast of the region, where records of human habitation stretch back over 1,500 years. We’ll explore by Zodiac or by foot, as landing conditions permit. We’ll keep a look out for Nattoralik (white-tailed eagles), seabirds, marine mammals, and enjoy the lush vegetation of southwest Greenland.

Nuuk, the capital of Greenland, bridges old and new. The old harbour region of town includes many buildings dating from the Danish colonial days. Nuuk is known for art, shopping, and cafes. The Greenland National Museum is one of Nuuk’s many outstanding features: the world-famous Qilakitsoq mummies are housed here.

Defined by jagged mountain peaks, sheer bird cliffs, cascading streams, and calving glaciers Kangerlussuatsiaq lives up to its Danish name, Evighedsfjorden meaning Fjord of Eternity. Whether by ship, Zodiac cruise, or kayak, a visit to the face of the glacier is truly a sublime experience. 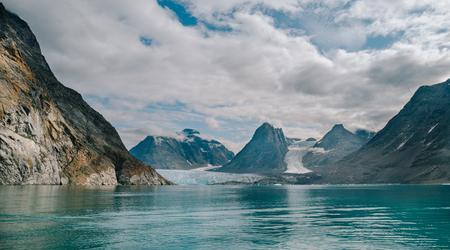 Søndre Strømfjord offers 168 kilometres of superb scenery. Kangerlussuaq, the settlement at the head of the fjord, is a former US Air Force base and Greenland’s main flight hub. Here we will disembark the Ocean Endeavour and transfer to the airport for our charter flight to Toronto.

Don't miss this opportunity of a lifetime with Margaret Atwood! Offer may expire anytime.

Adventure Canada itineraries may be subject to change without notice due to weather, ice, and sea conditions.

We engage, entertain, and educate by connecting people to each other and the land through innovative travel experiences. We cultivate connection and community. We celebrate culture. We are driven by heart, humanity, and hope. We can be the company that does expedition cruising the best, but we can also be the company that does it for the best reasons.

Enquire for the offer now!

FacebookTwitterEmail
* This offer is subject to availability and can be withdrawn or varied without notice.